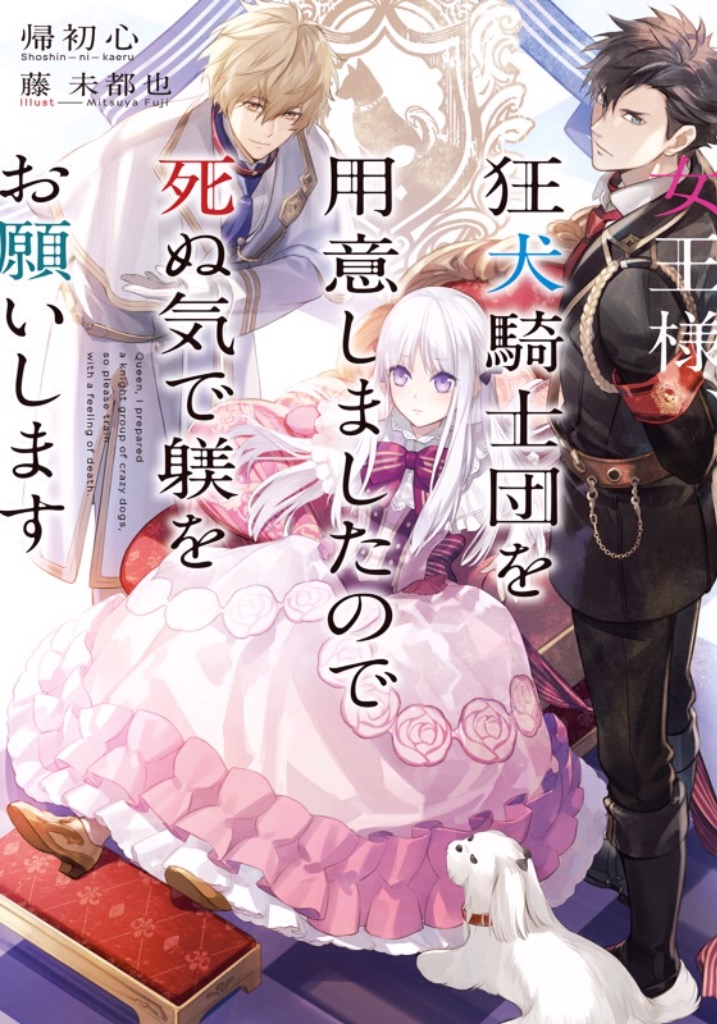 This time I have only one thing to say-
WOW these dogs are just something else! I am not even sure whether to categorize them as Yandere or not!
P.S. I learned how to add Footnotes (YAY) so the amount of TN (Translator notes) in the middle of the chapter will now decrease!
Credits:
Translator: darklain0725
Editor: grannyfoodie

The 6th story- Master(goshujin-sama)! Oh my wish and desire! (by Wolfhound)

Darius-sama won’t come out of the dog-hut。
This isn’t a metaphor。I am standing in front of a big dog-hut enshrined in the Knight order Leader room。
Grasping tightly at one of the 3 sacred tools entrusted to me by Leonheart-sama。From the entrance below the【Darius】nameplate, a round back and a wilted tail can being seen。
I can see that he is very depressed。
Behind me, there are Darius-sama’s three fidgety subordinates 。
Changing into dog forms they are watching over him。
Two out of the three of them, while being of different size, were very similar to DaShiba。

No！
Just now, I said a very rude thing to them。
Even if similar to Bad Shiba(dame shiba), the two are a dignified in a way that he possibly can’t be。

The other one is quite similar to Grey-sama。
If I remember right the family names of the 3 of them were, Akita, and Kishuu, weren’t they I wonder。(ED2: Praise Akita!)
Let’s confirm the full names again some other day。

That the situation became like this, it is all my responsibility。

He is someone that rarely takes a human form in the first place apparently, and he holds dignity and takes pride in his dog self more then anyone。
That pride, in the country I was born and raised would get expressed as「Higher then the Fuji Mountain」, but on this continent it would be called「Higher then the One Man Mountain」apparently。By the way that mountain’s elevation above sea level is about 10,000 Meters。I wonder if it isn’t probably the highest mountain in the world。

To his words「It was something I did thinking it will be beneficial for master(Goshujin-sama)」, I happened to deny it with all my strength。

Immediately following my「Go return it！！！」shout。
At first he didn’t change the expression on his face。
However, the tanned fearless face was gradually turning pale, at the end he changed into a really large dog with stiff fur。

And apologizing『I ended up doing something unpleasant。I am very sorry』, and rolling his tail has left out through the door！(Ed: Rolling his tail??? O.o)

His three flustered subordinates, have left chasing his retreating figure。

After Darius-sama left, I was at a loss。

「Dogs want to be praised。However, Darius was in the wrong。Although he should have confirmed first whether Lizelotte-sama, likes conquest or not。Don’t mind it。Milady(you) got angry at him as the owner (shujin)。That is how it should be」, is how I am being consoled by Leonheart-sama、

Is what I was told by Grey-sama。
When I turned looked over my shoulder the uncle has changed into a dog, and was rolling his tail。

When I look around, the Dog-kins inside have changed into dogs, and are hanging their heads down with a Kyun。
Especially the tails of the people belonging to the 2nd Division are falling。The mood in the meeting-room, withered for some reason as well。

（Did I mistaken the correspondence in handling this……）
Barbarian-sama is laughing, at me who was paralyzed from confusion。

「He is stupid isn’t he。If anything after destroying all of the intelligent creatures all he should have said is『We have found an uninhabited Island。It’s perfect to be Milady’s(your) summer-resort grounds』。Queen, you don’t have to worry about it」
「No, that is also bad」

There, Step-brother threw me a timely lifeline。
When Leonheart-sama nods with a「Umu」, the dog-kins gazes are gathering together。

To the voices that are whispering「He is the boy that was Queen’s step-brother」「For the sake of protecting her he marched into this country or something」「But in the end, he didn’t protect her at the old continent after all」「Can he be trusted？」「As if we can trust just a human」, the black rimmed glasses didn’t even move a muscle。As expected of him。

Exactly what in the world is he talking about。
Unrelated to my confusion, step-brother is respectfully continuing 。

「Wolfhound-sama has, received Lizelotte-sama’s very first『Bad！』。While unfortunately he couldn’t get her to say「Die」but, this is surely Master’s (Gohusjin-sama’s) official order。If you don’t call this an honor then what would you call it」

To these words, the ears of all of the doggies that were hanging their heads stood up like PIN。The people that are taking the forms of humans as well, are with sparkling faces and、

「「So that’s how it was！So it was a precious order！Lord.Wolfhound was granted such a glory」」are glad。

Most likely if these words were to be translated though,「You want to be cared for right？You want to be ordered right？Just be glad already」is what they would mean I think。Even so……。

Unrelated to my unrest, the joy is spreading among the dog-kins。That “we are so glad”。
Grey-sama that is hanging his head as well, his ears are moving eagerly。

「However, that is that。Milady didn’t like the however, for the sake of praising Wolfhound-sama’s achievements until now , an even more wonderful reward is supposed to be prepared。
―————like, brushing for example」

Grey-sama has put a lot of strength into his limbs and stood up。
His drooping cheek gone up, and his eyes are shining with sparkles。

Unrelated to me who was caught dumbfounded, among the dog-kin-sans for some reason a deep impression has started spreading。

The Dog-kin-sans close to Grey-sama, especially everyone from the 2nd division are deeply moved, and with WAN WAN！ are drawing close to me。
If Mars-sama, Theresa-san, and Leonheart-sama & co didn’t restrain them, I was very close to being about to be pushed down by the many dogs。

All of the dog-kins throughout the meeting-room change into dogs and are surrounding, and barking at me
Even Barbarian-sama with a「 This is interesting as well」changed into a dog。

At the end step-brother purposely warped his smile and cried out、
「Please scold us more, Lizelotte-sama。And please dye us in milady’s(your) colors！」。

Only a little more then 10 minutes, since Darius-sama has left。
Among all of the dog-kin, for some reason being scolded by me has become a symbol of status！
―———The last line is out of question though。

At step-brother who is being praised by everyone, and once more is respectfully putting his hand against his chest, Leonheart-sama is looking with a complicated expression on his face。
While muttering「Within a short time he has already grasped the dog-kin’s nature……such an ominous man」。

Now, returning to the beginning。
I call out to the depressed super-large doggy, that completely secluded himself in the dog-hut。

Surprised, the big back trembled。

And placing his tail further to his stomach, he tried making himself smaller and smaller。
I felt very sorry。

「I am very sorry for scolding you in front of everyone else。Also, there was something I didn’t say enough。
You have have saved this country, and furthermore have searched for me didn’t you。I don’t need the , but I am grateful for your actions。Thanks to you, I can live safely like this together with my pet dog and step-brother」

The back won’t say anything。
However, it looks like the trembling has stopped。

「I am a humble 10 year old, and I don’t have the sense for politics or economics。
However, as I want to do something within what I can do to thank you, I received this from Leonheart-sama。Please, would you let me give you a brushing」

I raised the sacred tool in my right hand。
One of the 3 great sacred tools of the royal family, the『wanwan Brush』。Said to be used from the first king, it’s a dog-type brush that is said fits any coat of dog hair apparently。

It’s a brush that is a little large for my hand, but it has a simple and easy to hold shape。
Using some kind of animal’s fur it’s a two-sided type, with roundly manufactured hair tips。
Both sides of the brush were something that more than being exclusive for fur, but also  for massages。The first king’s feelings of wanting to care for his doggies are being conveyed。

I could tell the 3 doggies behind are gulping to the sight, of the plain-looking effect of the Sacred tool brush。

If I remember right the Wolfhound clan were, people that apparently were said that they can defeat a Fenrir and also a Dragon alone in the times。That figure of the powerful stature that is elegantly coming here, has vividly reminded me of that legend。

「Thank you for your hard work。Please be relaxed okay」

I am starting the brushing on the back of his neck。Darius-sama seems to be spellbound in a state of ecstasy。
Probably since he was continuously traveling。When I gently combed the hard fur on his back、around the face, and the wire-like fur on his chin he happily released a breath out his nose。Please heal your fatigue with the brush’s massage okay。

With unfocused eyes、I hold the given collar and ask。

And、hyoi being held up by the collared Darius-sama、I was carried in a way that I was sitting on his left arm。(TL: O_O , he can lift a 10 years old girl with one arm?!  sure she is a bit skinny from losing a lot of weight all at once, but still!) (Ed: Pretty buff man.)

Darius-sama is pridefully, boasting about the red collar that is wreathed around his own neck。
Leonheart-sama was、sullen over Darious-sama’s boasting for a moment but、just as relieved anyhow put his hand over his best-friend’s shoulder。

Step-brother quietly told me、from my side。
Although he is being beside the Queen without permission、everyone from the guards don’t particularly heed him attention。
It appears, that ineligible speech was popular to great extent。

Darius-sama、who long ago served as my real father’s page。
It seems that he followed he everywhere, saying I love Master (Goshujin-sama)。
The dog-hut’s nameplate、was also personally written by the late king apparently。It was quite the individual handwriting。

When he passed away、the king、has apparently forbidden the grieving in sorrow dog-kins to follow him in suicide。
The orders are absolute。After the king’s death he who became all worn out, entered the dog-hut and didn’t come out it seems。
The story that Leonheart-sama desperately pulling in his mouth his best-friend that became a shut in with a「I am a stray-dog that failed to die so I won’t work anymore」and made him lose hair is famous apparently。

The beauty clinging to me, crumbled down his lovely face for a moment, however he shortly returned to his serious look。

「The one who can be spoiled, play jokes, and smell Master’s (Goshujin-sama’s) feet、is me！」

I don’t need that last one。

I stopped my eyes、and was carried down the corridor。

A solo mage wondering numerous harsh realities, seen all manner of authors, editors, and translators fall into ruin and despair and yet not once have they gave up.

And so, as I play – Unlimited trans works!

Hair & eyes color – brown with tinge of gold and red

Currentl occupation- military technician (not by choice believe me)

A friendly, fellow translator who stops by to help out. 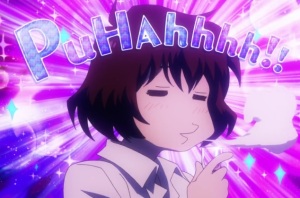 Current Occupation: College student drowning in essays and books while surviving on coffee/tea depending on the season!